Many moons ago, I had a teacher named Carole Chisholm, and I am sure I am starting to annoy her I have written about her on so many different occasions.  I have been thinking about her a lot the last few days as I take on this 30 day blogging challenge.  I had her for high school English, and I think it was in grade 10, she started us all journaling.  She would give us one line, or a quote, or a question, and we could write anything we wanted.  With those journals she fuelled my desire to write.  And I still remember my favourites, and I even kept some of the old scribblers from 25 years ago.  On way day she gave us the task of creating our bucket list.  At 15, I remember that we had to ask what a bucket list was, and why would someone want to make one?  I can't remember her exact reply, but it was something like, "Everyone should have desires, dreams and hopes.  It is what makes life interesting."

And so that night I sat down and created a bucket list.  Now remember, I grew up in rural Nova Scotia, and I had not experienced too much of the world except for in the books that I loved so much.  So I had things like, "I want to watch fireworks with someone who loves me." and "I want to go to the Calgary Stampede someday".  I think I came up with about 24 things.  And then I turned 19, and had a bone marrow transplant, and my bucket list changed.  I sat down one night a few months after the chemo had taken my hair and came up with a new list.  I wanted to go to Graceland, get married, and live to see 30.  That was my goal.  I recently came across that list, and you know what?  With the help of Tim Murphy, who found my list in my bible shortly after we started dating, I crossed almost everything off that list, except, ironically, getting to the Calgary Stampede.

He married me when I thought I was going to die before I would ever experience such a thing.  He took me to Graceland, he watched fireworks with me in DisneyWorld, we had children together that were miracles, and adopted the most beautiful little girl you have ever seen.  I would say he added things that I did not even know were on my list, such as romantic dinners, date nights with the mattress on the floor when we were so broke we couldn't afford anything else, new puppies when he would rather not have puppies, taking me to warm climates when I thought I would hate it and had the exact opposite reaction, and telling he loves me every day.

So I realized the other day, that it is time for me to create a new bucket list.  I turned 40 this year, and like Ms. Chisholm said all those years ago, I want to keep life interesting.  So I no longer what to get married, have children(well, maybe one or two more), and material things have never been something that had great appeal to me(especially since the transplant...something about almost dying that makes you realize you don't need a lot of "stuff).  So what should be on my bucket list?  I would say number one would definitely be more travel with the kids and Tim before they grow up and start doing their own trips.  I love travelling with them, it is so much fun seeing their reactions to new experiences, food and culture....it makes it all the more fun.  And there are some trips that I want to take with Tim to experience the country with him...Thailand, South Africa, and we still have to get to Vegas.

I would like to own property on a remote island off Cape Breton.  This has been a dream of mine since I can remember, probably from the first time I went to Port Hood Island when I was in Guides.  When I realized that Tim loved the idea as well, it felt like it was something that we would accomplish eventually.  We sometimes day dream about having a restaurant there, with our own gardens, and chickens....and Tim wants some pygmy goats(go figure).

My bucket list would include having more time to volunteer more in my community.  For seven years in Cape Breton I volunteered with the palliative care program there, and I still miss it.  The patients and families that I got to know often became like family, and it was one thing, like fostering that seemed like a part of me.

Those are the big things.  But I have many silly, fun and crazy things that I would still love to do in my life.  One time we were walking around Quidi Vidi in St. John's, Newfoundland, and we came across a small cottage that was open to the public.  It had old books and maps and historical items related to the little community.  We started talking to the old lady who lived there, and found out that she was closing shop that week, to take a long awaited trip to Africa.  She was 84 at the time, and I will never, ever forget her advice to us on that warm summer day in August.  She said that if you stop dreaming and stop moving, life will stop too, and where would the fun be in that?  We had gotten engaged the night before and she told us to love each other with passion, and to live each day to the fullest.  I often wondered how she enjoyed her trip.

I want to drive a convertible on a deserted desert highway, one that can go fast. I want to take a hot air balloon ride.  I want to see Elton John in concert.  I want to take thai cooking lessons, and write a frigging book once and for all!  There are many other things that sitting here tonight I realize I want to do in life....I guess I better get busy on that new bucket list! 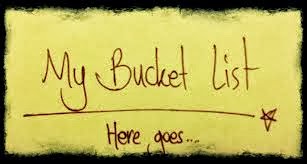 Posted by VernaMurphy at 5:50 PM